CR(Y)PTALY: A CURATORIAL VIEW ON ITALIAN CRYPTO ART AND BEYOND

During the sale held at www.crazydefenseheroes.com, a total of 100 Super Value Chests sold out, including all Legendary chests (the highest and most valuable tier available) which sold out in less than 24 hours. The Crazy Defense Heroes collectible card NFTs obtained in the Super Value Chests can now be traded at Opensea.

The Super Value Chests sale marks the first foray of Crazy Defense Heroes - a traditional mobile game - to explore opportunities provided by blockchain technology, and represents the first of several planned actions to overcome the divide between the worlds of traditional gaming and cryptographic gaming.

In conjunction with the NFT sale, there will also be an in-game event, which will see players fighting off a Borg Cube, which has appeared through a rift.

The event will start on Friday 29 May.

Atari®️ Teams Up with Arkane Network

Atari® — one of the world’s most iconic consumer brands and entertainment producers — today announced a new partnership with Arkane Network, a global monetization platform and provider of multichain blockchain APIs and wallets. As part of the agreement, Arkane will integrate Atari’s crypto-currency in its offering and will support the Atari Token and Atari’s strategic objective to boost the adoption of the Atari Token throughout the interactive entertainment ecosystem and its blockchain initiatives.

The Atari Token is issued by Atari Chain, Ltd (Gibraltar), a company equally owned by Atari and the ICICB Group. Arkane, a blockchain platform for game developers to create, secure, and monetize their digital game assets, will support the Atari Token, making it so developers can use the Atari Token as in-game currency for buying, selling, and trading assets.

“Atari has always been a pioneer in the video game industry and it is great to see how they understand blockchain technology’s increasing role in the development of the economic landscape within video games and entertainment,” said Tim Dierckxsens, CSO & Co-Founder of Arkane. “With this partnership, we will bring game developers, the gaming community, and the Atari Brand together to embrace blockchain technology as a solution to record digital assets and value transactions”

“Our partnership with Arkane is another significant step toward broad adoption of blockchain initiatives across interactive entertainment, and specifically our Atari Token cryptocurrency as a secure means to buy, sell, and trade digital assets,” added Fred Chesnais, CEO of Atari Inc.

Further information on the Atari Token is available on the dedicated website www.atarichain.com.

2 years ago, on April 26th, 2018, Vladimir Tomko, CEO, and the team of Blockchain Cuties Universe, launched a crypto collectible game that was meant to define the industry. It was a time of pioneers and brave enthusiasts; this was a field nobody had ever explored before. On that note, Blockchain Cuties worked tirelessly to make a name for itself using the particular description “one of the first”.

Happy 2 years: the game & the players

Blockchain Cuties is a crypto collectible game with strong strategic elements, innovative gameplay, and most importantly, characters presented as real digital art with its own value and functionality. These characters, appropriately named Cuties, are shaped like cute animals or fantasy creatures – lizards, kittens, bears, rabbits, aliens, etc. Players get to breed their Cuties, send them on exciting adventures, and skilfully arm their little warriors to fight against bloodthirsty Raid Bosses. And sure, players can also sell their characters any time for any price they find fair. 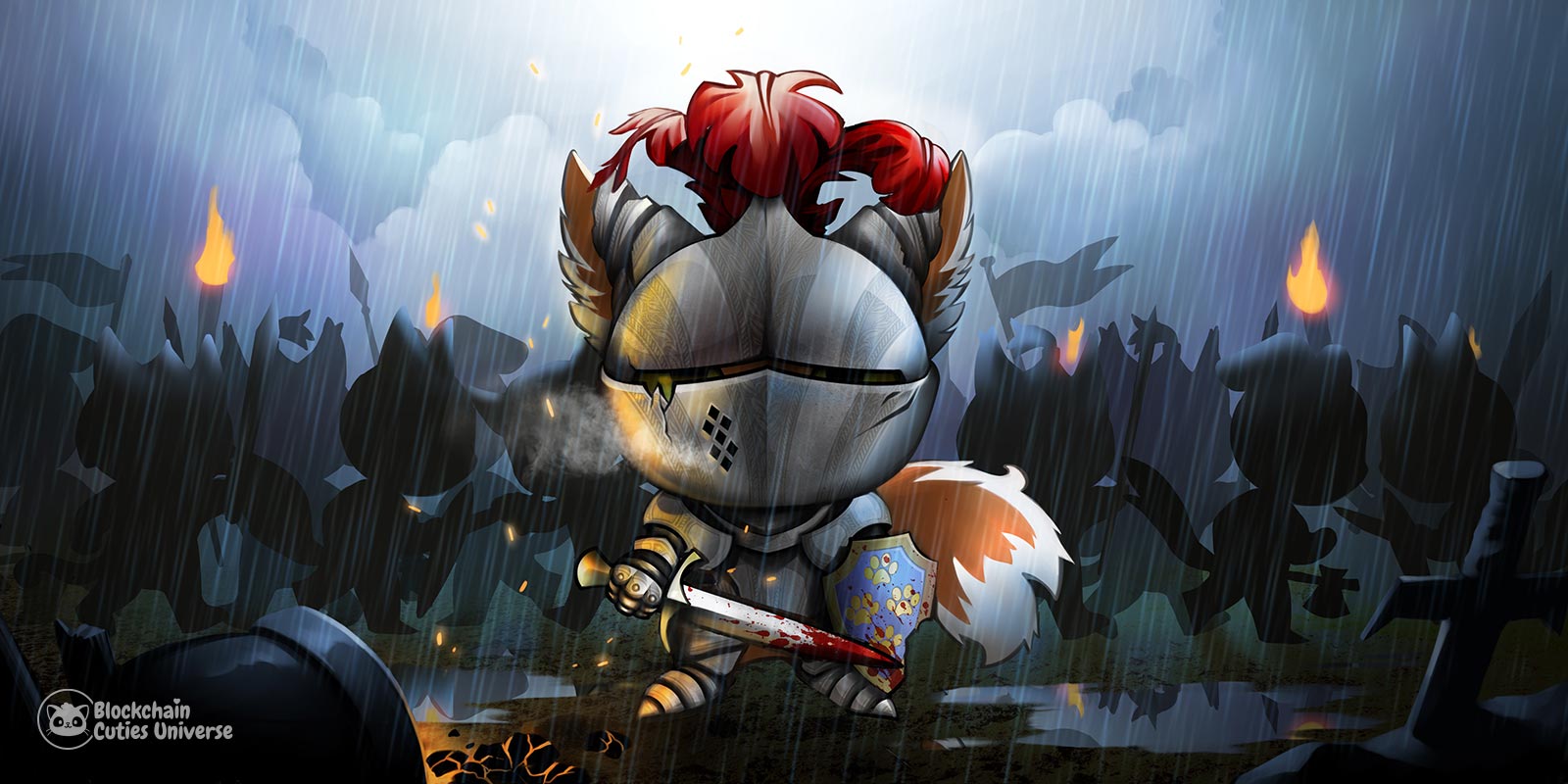 Since the very beginning, the game has utilized a special communicative approach with its players, aptly named the community-driven development approach. This means the players have an active hand in developing the game. Thus, players receive power and freedom, fulfilling the substantive promise by blockchain technology itself.

As the players are the key component for a successful and strong game, Blockchain Cuties has decided to flip its birthday on the head and share the love by giving away some valuable gifts. The game doesn’t expect you to come over with a cake, just a couple of nice wishes are enough.

The very first character in Blockchain Cuties was an adorable cat named Kote, the official Mascot of the game. In order to commemorate the event, the team has decided to give away special edition Cuties...Meet 2 kinds of anniversary cats:

– Ms. Year Two for players who joined the game before 25.04.2020 and anyone lucky enough. It’s a unique Gen 1 Cat with a golden attribute called Year2.

– The comment must include a link to your player profile

– The comment must include the following hashtags #blockchaingaming #dapps #gaming

– The comment must include a nice birthday wish for Blockchain Cuties

KnownOrigin gallery closed 2019 with over 2,000 digital art editions on the platform and a 3262% monthly sales growth since October 2018. Regarding income, in 2019 top artists were XCOPY, Hackatao, Giant Swan, Alotta Money, Tom Badley and Rare Designer.

Difelice5000, XCOPY and Gary Cartlidge led the market as for number of sales, while Giant Swan and Rare Designer could also boast the record sale price of 10 ETH for the art pieces Purgatory and BLOCKCHAIN EDEN  respectively.

Overall, nearly 7,000 artworks were sold on KnownOrigin up to the end of 2019, with a significant increase in the gallery revenue in December. Artists and collectors were over 180 and both the community and the market keep growing.

Kyber teams up for Ancient Stone NFT in Axie Infinity

The deal will reward any Axie players who have at least 50 KNC tokens (currently worth around $25) in the Ethereum wallet they use to play Axie Infinity with the Kyber Ancient Stone. This will reduced resource harvesting times by 2% when placed on a land plot in the game.

In order to get the NFT, players will have hold the KNC tokens until 11pm EST on 22 March.

You can get more details and register your wallet at the Axie Infinity website.

MakersPlace marketplace offers more than 15,000 unique artworks, counting over 1,500 successful sales within the network so far. In 2019, top artists on the platform were Monfa, Skeenee, Dan Forlenza, Jarid Scott and Franco Verrascina.

As a platform mostly devoted to multi-editions, single-edition art pieces have been less than 20% of all works displayed. The average sale price in 2019 was about 0.2ETH, with the highest being 10 ETH (about $1,450 at the time of sale).

Over the past year and a half, MakersPlace team has been contacted by close to 5,000 artists wishing to join the network, and the team is now working with over 1,500 creatives. MakersPlace also has a vibrant online community, counting close to 2,000 people between artists and collectors on its Discord channel, and over 30,000 followers of the team's social media accounts.

SuperRare gallery hosts more than 4,000 single-edition artworks, over 2,500 of which have been sold in 2019. Among top artists, we find XCOPY, Hackatao, Coldie, TrevorJones & Allota Money.

In 2019, the average sale price of artworks on the platform was about $150, with the market thriving towards the end of the year. On 15th December EthGirl, a collaboration between SuperRare artists Trevor Jones and Alotta Money, was bought by collector Moderats for 72.1 ETH ($10,027 at the time of sale), breaking the all-time ETH sale record for the digital market.

SuperRare has a varied community of artists and collectors from 154 countries and receives about 25 artist applications per week, maintaining a 10% acceptance rate.

it is with extreme pleasure that we start NIFTIES.com Our team will work in the next months and hopefully years to help all the creative minds in the digital world get to know by the collectors in the real world.

We will try to promote all the projects in the space trying to have more people joining us.

We stronly believe in digital assets and the potential blockchain gives to them in order of trackability, liquidity and fun.

We will mailny focus on cryptoart, collectibles, in-game assets and vr but we will stay open to all those projects that deserve attention.

Please feel free to contact us if you wish to promote your projects, if you would like to collaborate and if you just want say Hi!

Official Formula One game F1 Delta Time sold through 37% of its crates in its presale which started on 25 February 2020 and is now closed. Ranging from around $20 up to $500, crates were priced in terms of their rarity, with the more rare crates containing more rare items. Items include F1 cars, drivers and components such as engine and body parts. In total, 2,375 crates were sold from a total of 446 unique wallets, raising over $350,000. F1 Delta Time is expected to go live alongside the F1 season, which is due to start in Melbourne on 15 March.

The second presale for LAND in The Sandbox has been a great success with all the available plots selling out. The total raised was 800 ETH (around $200,000).

This means that 7.5% of the total LAND that will ever be made available in The Sandbox has now sold out. Five LAND presales are planned in total. With the goal of being "Roblox on the blockchain", The Sandbox is a user-generated content platform on the Ethereum blockchain, in which creators and players can build their own gaming environments.

Animoca Brands has announced it's started an auction for its Australia Edition 2020 F1 car NFT. The auction will end on 22 March and all proceeds will go to various charities supporting recovery efforts from the recent Australian bushfires, including the NSW Rural Fire Service Association, NSW Wildlife Information, Rescue and Education Service, and Australian Red Cross Disaster Relief and Recovery Fund. You can check out the auction at https://www.f1deltatime.com/official/auction

Forthcoming blockchain game Dark Country is planning to airdrop an NFT into all 460,000 wallets on the WAX blockchain. Labelled 'The Virgin', this NFT can either be traded or used to generate another in-game NFT by being 'sacrificed on the 'dark altar' in the hope of receiving a valuable item. It's an interesting move for the 'American Gothic Card Game' to drum up support further to its public beta, which is due in Q2 2020.

US NFT wallet and onboarding solution Nifty Gateway has announced its relaunch. It's extending its features from enabling users to buy NFTs using their credit cards to now also enabling a trading marketplace using USD fiat pricing and cash out, at least for those with a US bank account. The company is also working with artists and brands to create exclusive NFT collections that will drop every 3 weeks.